The fear a 12 year old Mexican can raise

I think I’ve told you this before once or twice, but let me just repeat the story again. When I was a kid, I was always interested in all things having to do with science and technology. Dad was a car mechanic, his two brothers fixed televisions and radios. They learned their respective trades through books and manuals that my grandfather bought for them on his trips to the US. So I learned from them how to look at complex systems, see what’s broken, and go on a course of action to fix it.

Later, when I expressed interest in science some more, mom bought me a microscope. I must have been in 4th grade then. I went to public school in Mexico from first to fifth grade. Starting in sixth grade, we moved to the States. Anyway, I had that microscope and would put things under the lens only to be amazed time after time. There were living organisms in drops of water, even potable water. There were these neat crystals in a few grains of common sand. Leafs were made of small units that I did not fully comprehend.

To help me comprehend all that, mom and dad bought me books. I had encyclopedias and textbooks on science, and I absorbed them all in full. There were many times when I cut short play time outside with my friends to finish up reading about a topic of interest. However, because we were not well-off, I didn’t get a chance to fully take advantage of my intellectual curiosity. There just wasn’t enough money to send me somewhere with a better science and technology curriculum. Even when we moved to the States, public school was more about the basics (and a lot of Texas history on how “the Mexicans” killed all those innocent Americans at The Alamo).

By the way, I was fully bilingual by the sixth grade. Not only was English taught in school, but we lived on the border and I had American cousins. English was not a foreign thing to me.

I’m telling you all this in order to set-up the story of Marco Arturo, a 12-year old child prodigy from Mexico, and the irrational, xenophobic, and bigoted reaction he’s getting from the anti-vaccine crew. See, Marco posted a video about how vaccines cause autism…

Or, rather, how they do not. That video now has 7.2 million views. (For comparison’s sake, Andrew Wakefield’s chock-full-o-lies “documentary” on vaccines and autism has only been seen by about 30,000 people, and I’m being generous in that estimate.)

How did the antivaxxers take it? Well, here you go: 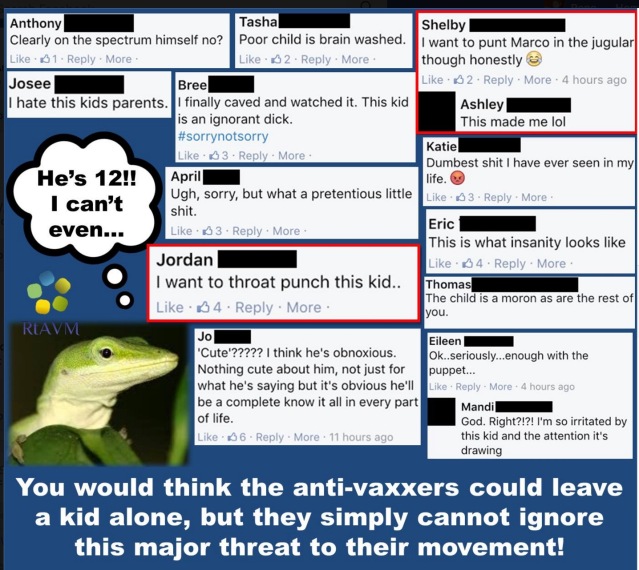 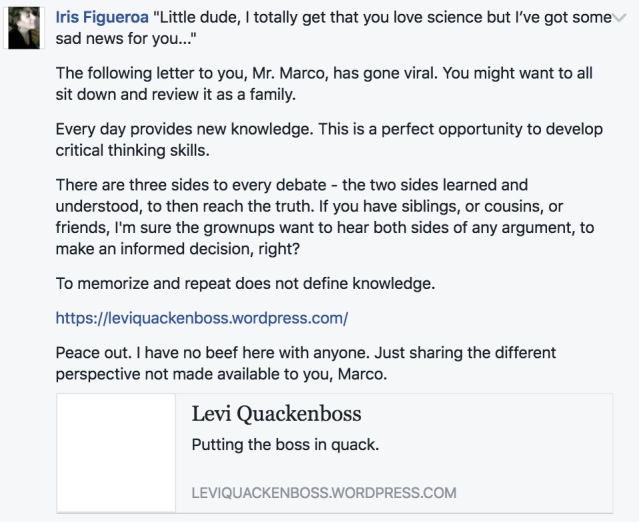 That post from “Levi Quackenboss” is discussed here and here. In essence, the attacks on Marco from the antivaxxers have resorted to personal attacks, to questioning if he is even a real person, and to wonder how in the world a Mexican kid could know English and be so well-versed in science and technology.

Yeah, I kind of wondered that myself. Oh, wait.

In my experiences with the antivaxxers, I have come to find out that they have a very egocentric view of the world. It’s all about them, them, them. If they experienced something, then everyone must have experienced the same thing. If their child was diagnosed with autism after the vaccines, then it must be the vaccines, and everyone getting vaccines will be autistic. (And the way they characterize autistics? Come on!) If they were not as eloquent and understanding of science as Marco is now, then Marco must be fake. He must be being coached.

And, even if he was being coached, there is nothing in any of his statements about vaccines and autism that are wrong. As much as they try to attack him, they can’t poke a single hole in his science. There simply is no evidence that vaccines cause autism, and whatever “evidence” is being bandied about is all about character assassination, conspiracy theories, and conflicts of interest. It really makes me sad for the antivaxxers they are so insecure in their beliefs that they are now allowing a 12 year old child from Mexico to live rent-free in their minds.

Finally, the undertones of racism. “Quackenboss” claims that kids in Mexico can’t possibly be as bright as Marco. And, if they are, they are being coached as part of some multi-national conspiracy. They claim that Mexico is pretty much a slum where children can’t be bothered with science and technology. As I sit around at my ancestral home in Chihuahua,* I see that this is not true. Yes, Mexico has a lot of challenges, and children here deserve better, but there are many of us who are lucky enough to have parents who instill in us a sense of wonder about nature and then foment that wonder with books and tools and great people/mentors to lead us on our way to discover more and more.

So kudos to Marco Arturo. I see a bright future ahead as a science communicator, scientist, and fighter of the good fight.

*I’m down here because dad is having some health issues. More on that when we’re ready to be more public about it.

← Where have they seen me before?
The Rorschach Test of anti-vaccine beliefs →