The things that will kill you 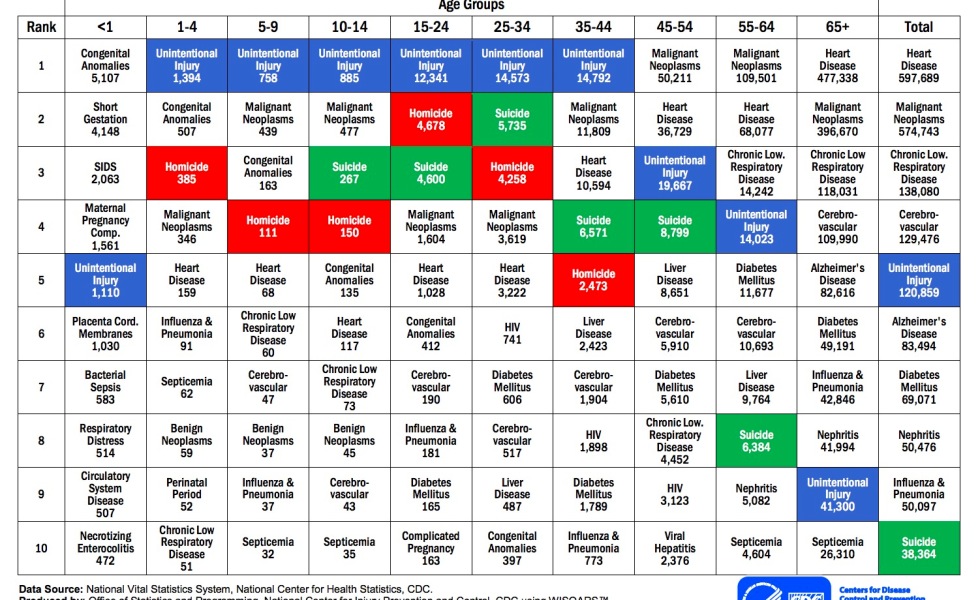 Just listening to the news, you’d think that all of us were going to get killed tomorrow from a massive terrorist attack. Heck, some of my colleagues have been going on so much about Zika that they make it seem like we’re all going to die from Zika… Or that a whole generation of children are going to be born microcephalic.

No, you’re not going to die tomorrow from a terrorist attack. Yes, Zika is a big deal, but it’s not the biggest deal out there.

Take a look at the following table:

If you read it closely, you’ll see that there are a lot of things out there that can kill you, but you should also see that what is likely to kill you varies depending on your age. If you’re under the age of one, you’re very likely to die from a congenital abnormality. (This shouldn’t surprise you if you know about the great advances in delivering and keeping alive — albeit for a short time — children with conditions which would have resulted in stillbirths previously.)

Throughout childhood and into adulthood, unintentional injuries are the most likely to kill you. But take a look at homicides and suicides. Note how suicides appear in the 10-14 age group and how homicide disappears from age 45 onwards. This speaks to behavior and other risk factors, like socioeconomics.

Speaking of socioeconomics… The table up there is only looking at age groups. When you start breaking down the numbers by race/ethnicity, family income, etc. The numbers start looking a little different. Diabetes probably moves up in ranking in the older age groups, as does heart disease. Homicide is probably at the top in the younger age groups. And so on and so forth.

← To Donald Trump, I’m A Criminal
That’s Weird. Radical Islam Is Not an Existential Threat, According to WHO and the World Bank →