That’s Weird. Radical Islam Is Not an Existential Threat, According to WHO and the World Bank

There’s this thing that you do when you work in public health. You try to look at the top causes of death and disability so you can better understand what you need to do in order to save lives “millions at a time” or some such. To do this, you need to be mindful of all sorts of things, like your sources of data, the quality of the data, and the best way to compare your populations with reference populations. There’s a whole series of courses in public health about this, and they’re very neat to listen to because you get an understanding of why epidemiologists don’t panic.

This dog is an epidemiologist during a pandemic.

The reason we don’t panic is because there are always bigger fish to fry, so to speak, when it comes to death and disability. For example, while the deaths of thousands from Ebola is a tragedy — especially because of the delayed response from “The West” — those deaths were a very small number compared to other infectious diseases hitting Africa, hard.

In 2012 alone, there were between 473,000 and 789,000 deaths from malaria in the world, with 90% of those deaths occurring in Africa. (Source: WHO) In 2014, between 690,000 and 990,000 people in Africa from HIV/AIDS. (Source: WHO) Thankfully, advances in antiretroviral therapy for HIV infection and better nets and repellents for mosquitoes are making a dent in all those deaths.

When people started talking about the end of the world because of Ebola, I didn’t panic. (I hope you didn’t, either.) I actually called into a radio show (Michael Smerconish on Sirius-XM satellite radio) and told the dude that the fly was coming. In America, on any given flu season, between 3,000 and 69,000 people die from influenza, a vaccine-preventable disease. (Source: Me. I know a thing or two about influenza.) To panic over one or two cases of Ebola making their way to the US from the returning healthcare workers was not the best thing to do. “We’ll see,” the dude said.

I told you the other day about the Republican candidate for the presidency making it sound in his rhetoric like the US was in shambles, all immigrants were roaming the streets raping and killing, and Muslims were ready to take out America. And that was just from reading the speech. I’ve listened to it since then, and, Jesus Christ, he made me fear for my life for 2.3 seconds. Then I remembered that the world is at an all-time low in terms of violence, and so is the United States of America. (Sources: The Washington Post and Slate.com)

Have you ever been afraid of flying on a plane? I have. My fear doesn’t come from ever being in a plane accident. Heck, none of the flights I’ve been on have ever even had to diver or go-around on landing. I’ve been afraid at times because my brain races to the worst possible outcome when flying. Any little jump, and the plane is going down.

And it all comes from watching stupid television shows about plane crashes, or YouTube videos, or hearing stories from people who have been in an accident. Because I know these things can happen, the brain tries to tell me that they will happen. It’s that weird ability of the brain to conjure up the worst possible scenarios in order to keep me alert and ready that has made me get a little clammy when flying through turbulence. 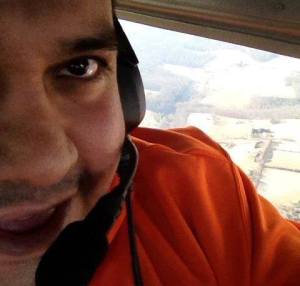 I’m still getting my pilot’s license one day, dammit!

So there is this group of evil people out in Syria and Iraq — some in Lybia and Egypt — who are convinced that the only way they’re going to get their way is through fear. They put up some really awful videos of people being beheaded or drowned to death, or worse. They “inspire” people in other parts of the world to just go berserk and kill people for the hell of it. And they do it all, according to them, in the name of Islam.

Now, I don’t know about you, but if these bozos decided to say that they were doing these horrible things in the name of Christianity, we would probably not call them Christians. And that’s because these horrible things go against every single tenet of Christianity. However, for some weird reason, people in the United States and other “Western” countries are quick to call them “Islamic” or “Muslim” terrorists. They’re terrorists, alright, but they’re not Muslims. Muslims don’t do these things that these terrorists do.

But, whatever, you want to play the name game. Go ahead.

Anyway, these terrorists do all these crazy things, and the number of people they hurt and/or kill — although a tragedy and something that needs to be stopped — is very small in comparison to the big killers out there in the world today. The top 20 killers, according to WHO, are:

Falls! You’re more likely to die from living to be so old that a fall will kill you than from being killed by terrorists. And, according to projections from WHO and The World Bank, the top 20 killers in 2030 will be:

Notice anything interesting? By 2030, your chances of growing to an old age are so good that you’ll be more likely to die from Alzheimer’s disease (and other dementias) than from terrorists. Note that “homicide” is not on the top 20 lists above.

Of course, you could play Devil’s Advocate and say that these projections don’t take into account a major war, a major famine (maybe from climate change?), or a major pandemic. You would be correct, but those things are not taken into account because their probability of happening is still very, very, very small.

Devil’s Advocate is very tiresome, by the way.

Of course, these numbers are for the world over. There can and will be pockets of concentration of things like pestilence and war. We could have some big, elaborate plot carried out by terrorists that would kill another 3,000 people like those who died on September 11, 2001. (Another 3,000 died that same day in the US, by the way. And another 3,000 the next day and pretty much every day.) Vladimir Putin could get a bug (further) up his ass and decide to invade the Baltic States.

These are not reasons to carry out the wet dreams of authoritarian people on any side of the political spectrum. If either Orange or Hillary tell you that anything outside of that top 20 list up there is an existential threat to the American way of life, do not believe them. And if either of them takes away research dollars to fight obesity, heart disease, vaccines, cancer, safer cars, mental health and diseases of ageing… Fight them. Fight them until you can’t fight them any more.

Or until they can’t fight. Whichever.

← The things that will kill you
Everyone Was Looking For Answers →

1 Comments on “That’s Weird. Radical Islam Is Not an Existential Threat, According to WHO and the World Bank”