On January 24, the Baltimore Police Department posted an announcement on their Facebook page that there had been an incident where two men were found with gunshot wounds. One of those men, Kelvin Armstead, died at the hospital from his injuries. He was 34 years old.

That wasn’t the first time Mr. Armstead had been in the presence of a gun. Ten years ago, Mr. Armstead is alleged to have been one of three men who killed Ricardo Paige:

“The neighbors knew Ricardo Paige as “Pops,” a kind man who lived and worked as a handyman in the Pen Lucy neighborhood renovating vacant houses for landlords.

But Paige, police and prosecutors believe, unknowingly crossed the wrong people in the neighborhood. Authorities believe that drug dealers who used vacant houses on the block thought Paige might have turned over a drug stash to police. On March 20, 2007, they confronted him in the house where he was living and working, in the 500 block of E. 43rd St., and shot him six times, including once in the mouth.

Police eventually arrested three suspects in the case, including one who was caught in Georgia last year after Paige’s killing was featured on America’s Most Wanted.”

Mr. Armstead was the one featured on America’s Most Wanted (Season 22, Episode 2, September 2008). He was convicted of second degree murder and conspiracy to commit murder. He was sentenced to life in prison, and the appeals court upheld the conviction. At some point, Mr. Armstead was released from prison only to be killed last week:

“Crime tape wrapped more than half of the 3900 block of Kenyon Avenue in the Belair-Edison neighborhood as homicide detectives looked for evidence at a rowhouse where two men, ages 24 and 34, were shot. Both victims were transported to Johns Hopkins Hospital, where the older man was pronounced dead. The younger man was in serious but stable condition, Baltimore police spokeswoman Detective Nicole Monroe said.”

He’s not the only one caught up in a cycle of violence that ends in their death. The first homicide of the year was that of Sheamon Pearlie, a 20-year-old:

“Two men were shot and killed in separate incidents in West Baltimore Sunday, the first homicides in the city in 2017. One shooting took place in the same block as the Western District police station.

Officers were on patrol about 3:15 p.m. when they heard gunshots from the 1800 block of W. Fayette Street in the Franklin Square neighborhood. There they found a man with a wound to his upper body, and he was pronounced dead at the scene.

On Monday, police identified the victim as Sheamon Pearlie, 20, of the 4600 block of Reisterstown Road.”

As with Mr. Armstead, Mr. Pearlie had been in the presence of a gun before. Back in December of 2015, Baltimore Police posted on Facebook that they had arrested Mr. Pearlie with a loaded weapon. That post has been deleted in the last month. However, here is the court record of the arrest.

From the Baltimore Sun’s mapping of incidents, we can see that the homicides for this year have been in the same general areas as in previous years, namely, the poorer and more disadvantaged areas of Baltimore: 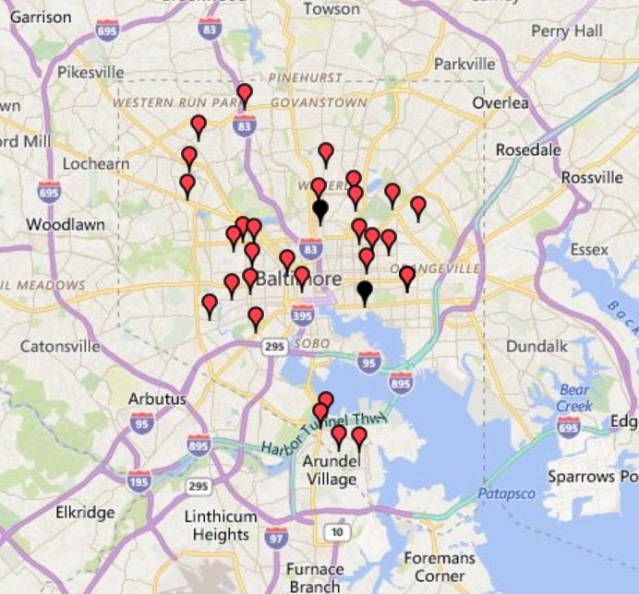 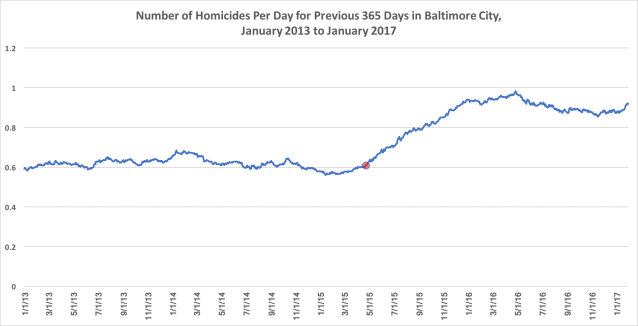 The red dot represents April 25, 2015, the day of the Freddie Gray riots. Before that day, around March of 2015, the rate of homicides per day began to increase, peaking around April of 2016, when the rate started to drop. Unfortunately, there’s been an upwards tendency again in late December of 2016 and January of 2017.

It would be great if one encounter with violence somehow “immunized” the person against subsequent encounters. The world doesn’t work that way, so other interventions are needed to keep people who have not been exposed to violence from being exposed and those who are from being re-exposed. All is easier said than done.

← Navigating the Political Seas
Should You Use A Bike Helmet? →