What Love of Country Is All About

I’ve probably told you this story before… When I was a child growing up in Mexico, we had to stand at attention and salute the flag before classes every morning. It didn’t matter if the weather was bad, too hot or too cold, we had to stand there and salute as a military-like group of kids paraded the flag around a center court at my elementary school. Then we all sang the national anthem, and then we closed the ceremony with by reciting the pledge of allegiance.

No one could opt out of this at the public schools.

The nationalism didn’t stop there. History books told of the greatness of Mexico, despite the realities that became more and more apparent around us as we grew up. We were told that we were a great people, born of the perfect combination of Spanish and Native heritage. We defeated great powers like Spain, France, and held off the Americans as best as we could. There was even a squadron of fighter pilots who served in World War II and helped turn the tide of the war in the South Pacific.

Yeah, okay. They did.

We were also told that all the social ailments around us were the result of American Imperialism, or European influences, or globalist agendas. The poverty in the periphery of the city — where houses were made of cardboard — was because our oil was stolen by foreign powers, or because people in Mexico City were living it up off our parents’ hard work.

Everyone else was to blame, and we had none of the responsibility for what happened.

The story didn’t change much when I moved to the United States. Here, I was told that America was the greatest country in the world. Everyone wanted to come live here because America was so exceptional. Communist Russia was still a thing, and then we got to see it die. “See,” they said. “Communism was a cancer, and we killed it. Our system is perfect.” 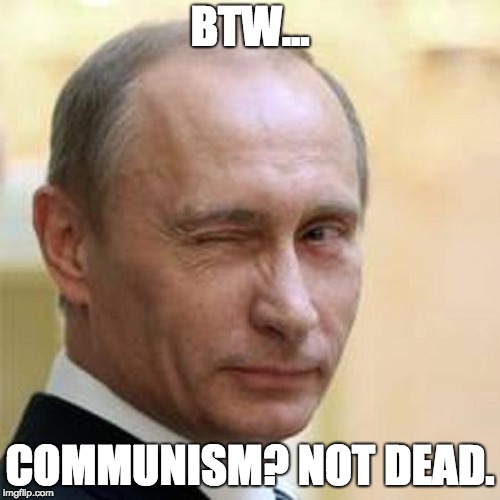 Then the 2000 elections came around, and that system was tested to the fullest. The guy who won the popular vote didn’t win the election because the system is perfect. The other guy took us into war. I went into Public Health, and I dared not complain about the things that were happening in the country (and the world, because of our country) to people I worked with in that little town in Pennsylvania. To them, the election worked just the way it had to. Those “Liberals” weren’t taking the White House.

It was then that I had an interesting conversation with a coworker. He plainly said to me that anyone opposing the presidency of George W. Bush should leave the country or be tried as a traitor. “He’s our president,” he said. “We obey our president in America.” Yeah… No.

When I was in high school, Jim Forbes (yes, that Jim Forbes) was the teacher for the government class. He said something that was very interesting to me. He said that he didn’t see the US Flag as the true symbol of America. He said that it was the US Constitution that really mattered to him. The way he saw it, the minute we lose respect for that set of rules of how the country is governed, we’re all screwed.

So why am I writing all this?

I’m writing all this because it’s the Fourth of July and there is a lot of discussion on what it means to be American. People who oppose the misguided policies of the current — and very Orange — Administration are being labeled as un-American. It’s almost as if there is a large segment of the population who either did not read their history books for all they’re worth, or purposefully want to ignore the pertinent parts of those history books to what is going on today.

There is nothing more American than to express displeasure in what the government and elected officials do. It’s probably the one thing that keeps them honest, or as honest as politicians come. I’m not talking about expressing displeasure with violence or intimidation. I’m talking about simple protesting, writing to one’s representatives, or tweeting at them in this day and age.

That right there shows the level of love for the country that a person has. If you just ignore the bad things, the abuse of power and the inequalities and inequities brought on by political decisions, you’re not showing any love to the country. It’s like not disciplining a child. Allowing a child to misbehave and get in trouble shows them no love. If anything, it’s a form of abuse, to be honest. Talking to the child, disciplining them, and setting them on a path to success is really showing love.

The same goes for one’s friends. If you see a friend who is going down a dark path towards something dangerous, you stop them, talk to them, and help them straighten up. You don’t just let them fail and get hurt. And, of course, the same goes for your country. You don’t try to burn the whole thing down and trigger chaos. You advice and guide your elected representatives toward policies that will benefit the most number people while hurting the least number of people.

Of course, different people have different opinions on discipline and advice. Heck, some people purposefully allow their children or their friends to fail and get hurt. “That’ll learn them,” they say. And, indeed, they’ll learn… They’ll learn not to rely on you when they’re in trouble. Similarly, I’m learning who can be trusted to help build a more prosperous and productive country, and who cannot.

I just wish more people did too.

← The Places Where People Are Not Exercising For Some Reason
Epidemiological Podcast S0E3: Hi, I’m a Doctor →