The Teams You’ll Play and Work With 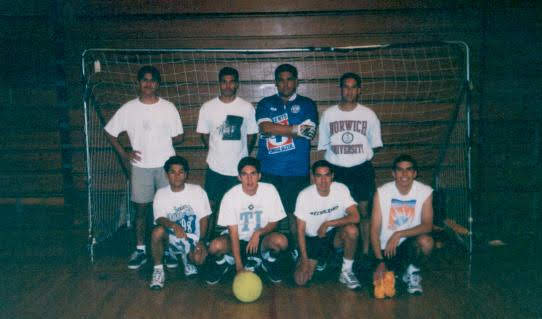 It’s the hot summer of 1997, and I’m running drills with the club soccer team as best as I can, given that I was up very late the previous night and had managed to forget to hydrate. The heat and altitude were getting to me, and I was definitely not giving my all. I worked through the cramps and managed to sneak some water here and there between running after the ball to the sidelines near my gear. This was the 1990s, and coaches used keeping water away as a punishment and allowing you to drink water as an incentive.

I was also the tallest kid in the bunch. I didn’t really stand head and shoulders taller than everyone else, but I was 5’11” and bulky. And, by “bulky,” I mean fat. Well, not “fat” fat, but certainly carrying around more weight than I should. It wasn’t too much weight to slow me down, though. It was enough to push people around and not be pushed, so every cross into goal was mine. Every high pass was mine. Any kid with any kind of ability to dribble the ball was no problem if they could be shoved and tackled into submission.

One day, the coach brought on a new kid. He was slightly taller than me and slimmer. We called him “el galgo,” the race dog. Tall and slinky as he was, he could jump higher than me and run faster on those long legs. He wasn’t muscular, though, so he was handled easily by the more sturdy-yet-smaller players around him with better centers of gravity. Slowly and steadily, though, he started to make gains on the field and become one of the best players.

At that point, I could have done one of two things. On the one hand, I could have up and quit the team and go find somewhere else where I was still at the top and feeling good about my position on the team. On the other, I could make the best of the situation and help El Galgo be a better player, thus improving the team and thus being a part of a really good team. I chose the latter. That season with El Galgo, I fed him so many passes for goals that I led in assists. I also dropped back from playing forward all the time and being blamed for not scoring to playing in the midfield and having free rein to defend with all my… uh… “heft.”

This early decision to not take all my toys and go home when someone better than me showed up on a team helped me a lot. As I grew older, I began to realize that all that competitiveness that testosterone causes in young males is wasted energy that could be used to make teams — and societies — better for everyone. There were other ways to stand out. Or why stand out at all? Why not work at keeping “the back channels open in hopes of staving off disaster” instead of being baddest motherbleeper in the room? It gets tiring, especially when you get little to nothing in return…

Several weeks ago, a position within the division where I work opened. I applied for it and thought that I was a shoe-in. After all, I had been doing the jobs of that position de facto for a while, during the pandemic response. I went into the job interview with confidence, and I think I did well in it. The problem was that there didn’t seem to be much attention paid to my CV. It was later relayed to me that I lacked experience in managing people — which I had been doing through my participation in the pandemic response, which I did when working in the lab and managing the phlebotomy staff, which I did when teaching and being lead TA for several classes at Hopkins, and which I did when taking on new challenges in my different positions as epidemiologist starting in 2007… 14 years ago.

I guess they just missed those things, or I didn’t make them clear in my CV. That, and one of the interviewers was surprised to find out that I was a Doctor of Public Health days after the interview.

They did ask two candidates to return for a second round of interviews, however. To make things more interesting, I was asked to sit down with those two candidates for a half hour interview/chat. Yep, that was very weird. “We won’t give you the job, but we trust your opinion on who should get it,” they seemed to say. (This infuriated my wife, by the way. She really wants me to leave.) I agreed to the sit-downs, and at least one of the candidates is a strong candidate for the job. I can see myself working with them to make things better within the division. There is a lot of work to be done on many things that the pandemic revealed.

Who knows? I might find myself feeding him so many passes on goal that I am the one who ends up getting credit for the wins even though he’s the one scoring. I mean, it does happen:

In coaching, you want to put together the best team you can. You probably want to have nothing but all-stars at every position, but then the egos get in the way and ruin things. Nah, man… You want good players. You want people who jive well together and get the job done, people without egos (or with normal-sized ones) who will come together when things get rough and get through adversity together. You want them to compete not with each other but with the people on the other teams.

The best thing about this current situation, and the situations I find myself in lately, is that I am old and experienced enough that I’m not sweating it. If it becomes absolutely clear that the opportunities for advancement are not there, I have options. (I have a doctoral degree from “the best school of public health in the world.” That ought to count for something, right?)

Now, if you’ll excuse me, there’s a job offer I need to tend to.